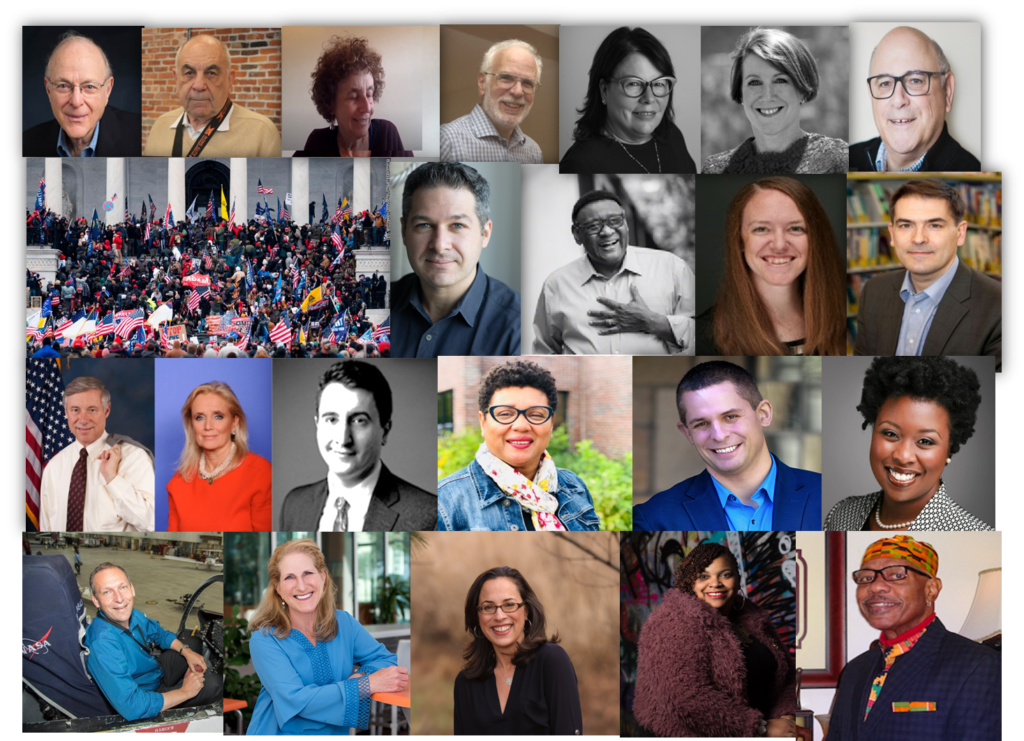 To watch past shows click on the buttons below.

What Happened on Capitol Hill

Dr. Richard A. Miller, Director, Paul F. Glenn Center for Biology of Aging Research will speak on what current research says about slowing and reversing aging.

Learn everything you should know about coronaviruses, including vaccinations, mutations, antiviral treatments and what we should be doing to protect ourselves from future pandemics.

Dr. Susan Weiss is considered “The Mother of Coronaviruses” and is co-director of Penn’s new Center of Research for Coronaviruses and Other Emerging Pathogens.

Dr. Isaiah McKinnon, former police officer who became the chief of  the Detroit Police Department and the deputy mayor of Detroit. He was one of the first African American officers in the Detroit police force and was almost killed by racist fellow police officers in an incident that was later covered internationally.

Ryan Clark of No Labels, and Representatives Debbie Dingell (D-12th CD) and Fred Upton (R-4th CD) of the Problem Solvers’ Caucus  discuss prospects for bipartisan legislation in Congress. Learn how goodwill still exists and how it can be effective with the support of No Labels, even in today’s polarized political climate.

Interview with Julie Campbell-Bode and Lori Goldman of Fems for Dems. Fems for Dems is an awesome citizen activist group that had a major impact in the 2020 election. The New York Times cited them 5 times last year because of their amazing work. Julie and Lori are funny, irreverent and inspiring. Learn from them what you can do to make a difference now and in future elections.

Ethan Kross – Chatter: The Voice in Our Head, Why It Matters, and What to Do About It

Chuck Newman interviews Award-Winning Psychologist Ethan Kross who released his First Book, Chatter: The Voice in Our Head, Why It Matters, and How to Harness It
Ethan Kross, psychologist, professor, and author shares his research on how the conversations people have with themselves impacts their health, performance, decisions and relationships and shape their lives and give them the power to change themselves.   He describes groundbreaking behavioral and brain research with colorful real-world examples.

Chuck Newman interviews Kevin Deegan Krause and Sue Norman from Ranked Choice Voting, a better way to vote. Ranked Choice Voting diminishes negative campaigning, decreases the likelihood of having to vote for the no ‘lesser of two evils”, encourages diverse candidates for elected office, increases voter turnout and eliminates ‘spoilers.’ Rank MI Vote’s Kevin Deegan Krause and Sue Norman will explain how and why it works and why it should be adopted.

Chuck Newman interviews Thomas Zurbuchen, a distinguished Swiss-American astrophysicist. Dr. Zurbuchen has been the Associate Administrator for the Science Mission Directorate at NASA since October 2016. He is responsible for the selection of NASA’s missions and their implementation. Get the inside scoop about NASA’s achievements and plans straight from the source!

How retired automobile executive Susan Schooner is helping young women reach their potential—and how that work has helped her find herself.

Chuck Newman interviews Jennifer Mendelsohn, renown genealogist and journalist, who shares fascinating stories of how she finds relatives of holocaust survivors that they didn’t know existed.

Chuck Newman interviews his guests William Hampton, the President of the Ann Arbor Branch of the NAACP and Leslie McGraw whose uncle was lynched in Tennessee for attempting to help blacks register to vote.

Little did they know that the Nazi’s would soon invade Hungary and how desperate their fight for survival would be. Join Chuck Newman and hear the amazing story of how Andrew Nagy survived WWII in Budapest in significant part due to the heroic efforts of University of Michigan graduate Raul Wallenberg.
He subsequently escaped Communist Hungary and eventually immigrated to the United States where he became a distinguished Professor of Atmospheric, Oceanic and Space Sciences at the University of Michigan. He still consults for NASA at the age of 89.

Michigan House Minority Leader Donna Lasinski  talks about  her resolution to create a bipartisan joint select committee to investigate Michiganders’ involvement in the Jan. 6 pro-Trump insurrection in the U.S. and also discusses the April 2020 storming of the Michigan Capitol during a protest against Gov. Gretchen Whitmer’s COVID-19 health orders, which congressional Democrats have argued was a “dress rehearsal” for Jan. 6.

The views expressed by Chuck Newman and his guests are their own and do not necessarily reflect the views of the Ann Arbor JCC.